NM ROUTE 66 ASSOCIATION
ATTENTION: Due to the COVID-19 (coronavirus) many Native American communities are closed to visitors. Travel to these communities is discouraged. These closures are part of the larger effort by tribal and state government to minimize public exposure and protect tribal members.  ​​Please continue to visit this website for updates and to explore online resources.
For more information regarding travel advisories, please visit https://www.newmexico.org/covid-19-traveler-information 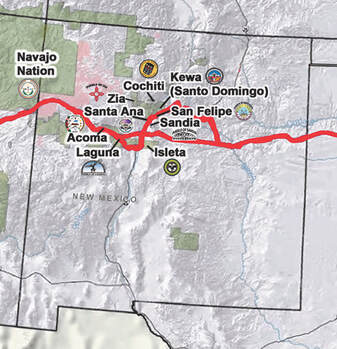 The Navajo Nation is the largest Indian reservation in the United States, with some 300,000 people spread across 16 million acres in Arizona, New Mexico and Southern Utah.

Each Nation (Tribe) is a sovereign nation with its own government, life-ways, traditions and culture.  Visitors are welcome to New Mexico’s Indian pueblos and reservations for dances and other special events related to Native American culture and traditions. Several hold regular tours and have excellent visitor centers with information about Native American culture and beliefs. Bear in mind that visitors are not allowed on certain days, when special observances are held in private. Call the pueblo or tribal office in advance of arrival to be sure that visitors are welcome on that day.
For more information regarding Cultural Etiquette, the Feast Days Calendar and other communities in New Mexico, please visit https://www.visitalbuquerque.org/about-abq/culture-heritage/
For more information about each Native American Nation, visit https://www.newmexico.org/places-to-visit/native-culture/pueblos-tribes-nations/

What is the difference between a Pueblo and a Reservation?
The difference between a pueblo and a reservation stems from the fact that the Pueblo Indians had their land granted to them (as did the Mexican residents of New Mexico) in the 1848 Treaty of Guadalupe-Hildago between the U.S. and Mexico, whereas most Indian reservations were established in treaties between the U.S. and the Indian tribes themselves. This gives the Pueblos a slightly different status in the eyes of the U.S. government. In most cases, however, this is simply an academic distinction which doesn't have many practical ramifications today.
Read more: http://www.city-data.com/forum/santa-fe/614639-pueblo-reservation-what-he-difference-2.htm

​The New Mexico Department of Transportation (NMDOT) and Federal Highway Administration (FHWA) are proud to present Route 66 and Native Americans in New Mexico.

The objective of the project is to examine the Route 66 experience for Native American communities and individuals, identifying common experiences across tribal communities as well as experiences unique to particular tribes or individuals. The report is intended to help tribes along Route 66 preserve this aspect of their history for future generations as well as better inform the general public.

Between November 2008 and October 2009 Shawn Kelley, a cultural anthropologist with Parametrix, coordinated with a number of tribes to document the historical relationship between their communities and Route 66. The resulting oral history information is from a number of individuals and groups who made this project possible. Members of Cultural Affairs Committees, Tribal Historic Preservation Offices, Tribal Councils, tribal administrators, elder groups, other tribal bodies and individuals contributed to the gathering of the oral histories used for this project. In particular, tribal representatives and elders from the Pueblos of Acoma, Cochiti, Isleta, Laguna, and Zia were consulted.
In addition to direct tribal collaboration, individuals from trading post families near or on tribal lands in New Mexico were also contacted and interviewed. Many participants agreed to have their names published in association with the project. However, some individuals did not want to be identified so their quotes or citations are not attributed to them by name.

A special thank you to everyone who contributed their time, knowledge, memories and photos. Your combined efforts have made this project a success. 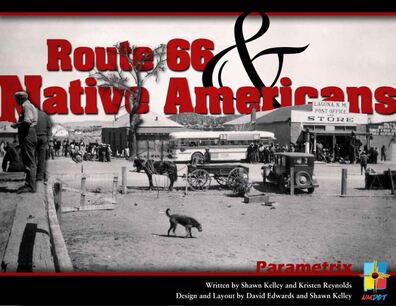 Route 66 and Native Americans in New Mexico is a 77-page study presented as a means of mitigating adverse effects to this historic road that have resulted from a bridge replacement project. The NMDOT, in cooperation with FHWA, completed improvements to Bridge 8, located along NM highway 313 over the Maria Chavez Arroyo in Sandoval County, New Mexico. After an analysis of various alternatives—including rehabilitation of the structure, bypassing the bridge, reducing traffic volumes, and relocating the existing bridge—no feasible alternative was identified. Therefore, Bridge 8 was demolished and a new structure was built in its place. Bridge 8, a concrete girder span bridge with a concrete thru-rail built in 1927, was indicative of early highway design standardization efforts. It was identified as a contributing element to this stretch of National Register of Historic Places (NRHP)-eligible Route 66. This section of Route 66, spanning the distance between San Felipe and Santa Ana pueblos, has historically been important for local access and the broader transportation needs of these pueblo communities. In recognition of this important role, the New Mexico State Historic Preservation Officer (SHPO), the National Park Service (NPS), NMDOT, and FHWA determined that a historic, ethnographic study of the Native American Route 66 experience in New Mexico was an appropriate means of mitigating the adverse effects resulting from the loss of Bridge 8. This mitigation is stipulated in a memorandum of agreement (MOA) with the SHPO and fulfills the NMDOT and FHWA responsibilities under Section 106 of the National Historic Preservation Act.

Download a digital copy of Route 66 and Native Americans in New Mexico below... ​ 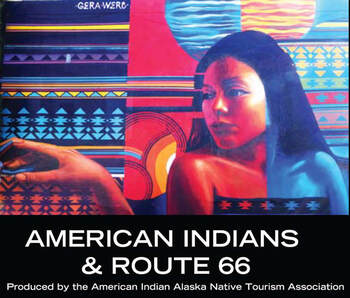 “Route 66 was an officially commissioned highway from 1926 to 1985. During its lifetime, the road guided travelers through the lands of more than 25 tribal nations. It was a give and take relationship between the asphalt and the American Indian people—from the physical intrusion of the road on American Indian lands to the new commerce the road introduced.

American Indian stereotypes were propagated and used as a major lure for tourists on this “Mother Road” of American highways and the evidence lingers. Faded billboards, rusty metal tipis and concrete ‘wigwams’ beckon from the roadside, evidence not of the tribe they were meant to represent, but of tourism marketing savvy. Today, the road can help break down these stereotypes as tribes actively share their distinct cultures and histories. American Indians and Route 66 was made possible through consultation and participation of many of the tribes along the route.

Route 66 begins in Grant Park, Chicago—or ends there—depending on which direction you’re traveling. At the intersection of Jackson and Michigan Avenues, a sign declares the “End of Historic Route 66." But according to statistics, most people begin the journey going west, a journey that terminates near the Santa Monica Pier at the intersection of Santa Monica Boulevard and Ocean Avenue in Santa Monica, California.

Whichever way you head, this iconic highway cuts its way across more than 2,400 miles of the United States.  More than half of Route 66 lies in Indian Country—roughly 1,372 miles.  American Indians & Route 66 seeks to introduce the tribes living along the route. We seek to inform and to point the way to genuine cultural experiences all along Route 66—from Chicago to LA.”
​
Brought to you by the American Indian Alaska Native Tourism Association: https://nativeamerica.travel/experiences/american-indians-route-66
Funded by the National Park Service’s Route 66 Corridor Preservation Program: https://ncptt.nps.gov/rt66/