The New Mexico Route 66 Association was founded 33 years in 1989. Its mission is to promote & educate people about “The Mother Road”….. as it is fondly referred to, the importance it holds in our Nation’s History, and to assist in Preserving it for generations to come. For 33 years we have done this through our meetings & events, our newsletters that later bloomed into a quarterly magazine distributed to our members across the globe and visitor centers across the state. We have also worked with visitors directly through phone calls, emails, our website & social media sites, and connecting with our State, National, and International Route 66 Associations. We are thrilled to see our years of hard work and dedication come to fruition in a physical form with the coming of the New Mexico Route 66 Association Visitor Center & Museum.

No other entity in our Land of Enchantment has dedicated itself to providing Route 66 Information about our state as the New Mexico Route 66 Association. New Mexico is home to 604 miles of Route 66. The most miles of any of the eight Route 66 States. With the coming of the NM Rt66 Association Visitor Center & Museum comes an opportunity to provide our residents, as well as visiting guests, a place to come to and learn about those 604 miles of Mother Road stretching across our state, and what portions are still drivable today.

Our association has a designated Preservation Officer, Johnnie Meier. Since the desertification of Highway 66 in the 1980’s, he has been a constant activist of preservation for The Mother Road. He is a recipient of the New Mexico Heritage Preservation Award. He has assisted numerous businesses in obtaining preservation grants not only for our state, but for other Route 66 states as well. He served as president in previous years and has continued to contribute to the association as a board of director. He started our quarterly “New Mexico Route 66 Magazine” and continues his passion for the Mother Road through his writing talents. He is the owner & curator of Classical Gas Museum in Embudo New Mexico. Now he brings his museum and curating talents to head the New Mexico Route 66 Association Museum.

The association is thrilled to have this opportunity to offer Route 66 visitors from around the world a distinguished museum representing the Route 66 State of New Mexico.
Kaisa Barthuli, Program Manager of the National Park Service Route 66 Corridor Preservation Program was unable to make it to the press conference,
but provided the following statement to share:

"Providing the public opportunities to experience and learn about Route 66 through fascinating, tangible artifacts that connect them to the past is so important. It is important for school children, community members, and citizens to help us understand who we are and how we got here. For travelers, it creates yet another reason to slow down and spend even more time in Tucumcari, benefitting the businesses, other museums, and economy of the city. Overall, it develops continued appreciation of Route 66 for generations to come.

I commend the New Mexico Route 66 Association for this initiative, and congratulate the City of Tucumcari for a new, important Route 66 asset, just in time for the upcoming 100th anniversary of the road. 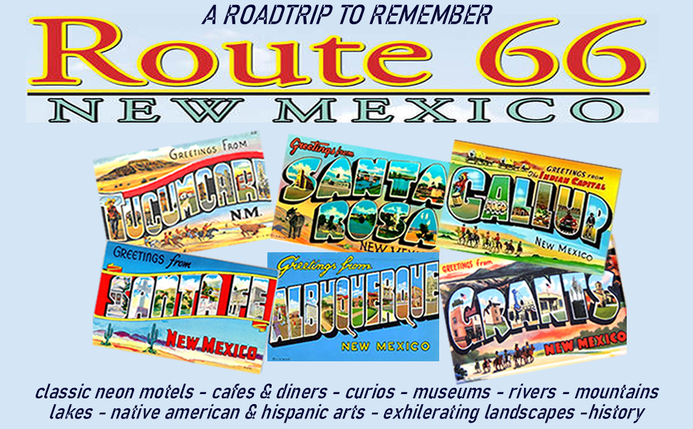 "One of the first roads in the U.S. highway system, ​it spanned more than 2,400 miles (3,862 kilometers).
​The longest urban stretch is in the Land of Enchantment, New Mexico."   - US News & World Report.​
Click here to Check out some of our previous motor tours!

​The New Mexico Route 66 Association Business Directory
​
is your go-to resource for Goods and Services. ​

Check out our Business Directory here.

communities along the ​longest urban stretch of the Mother Road.

In the 1930's, it was the promise of a better life out west, via Route 66, that carried folks to new hopes and dreams.
During  World War II, it carried servicemen, ammunition, and supplies.
After the war, it carried veterans and their families to new homes and fresh starts.
"You'll experience a fascinating blend of three cultures, Native American, Spanish Colonial, and Western American. Beautifully rugged and endlessly engaging, New Mexico is like stepping into another land." - iExplore.
West Central Route 66 Visitor’s Center - Albuquerque
Hello Everyone! Hope you are enjoying The Mother Road through the Land of Enchantment!
​The New Mexico Route 66 Association has received quite a few inquiries regarding the Route 66 Visitors Center on Albuquerque’s West Side. We wanted to clarify we are not involved with this project. This is a partner project of the City of Albuquerque and Bernalillo County with the West Central Community Development Group. Please refer all inquiries to: Luis Hernandez, Executive Director| West Central Community Development Group (dedicated to enriching the lives of community members in the West Central area) | 5921 Central Ave NW | Albuquerque NM 87105 | info@wccdg.org | 505.688.4122.
We met with Luis in February 2021, at which time we discussed their plans and offered our advice. We wish them all the best! (For more information about the February 2021 meeting, a follow-up article was printed in the Spring/Summer 2021 issue of Route 66 New Mexico Magazine. That article is attached for download along with this message.)
Cheers and Safe Journeys wherever you are and wherever you may travel!  Melissa Lea Beasley-Lee, President.